For sunny moments, go to Africa! In the far south of Benin, our4-star hotel in Cotonou welcomes you for a comfortable stay. Whether for a business weekend or a trip with friends, book your room in a hotel with a swimming pool and enjoy Cotonou, a large port city and the economic capital of the country....

Our hotels in Cotonou

Book a weekend stay, a family vacation or a business trip at one of our 4-star hotels in Cotonou
List
Map

Book
TO DO
ACTIVITIES

What to do in Cotonou

Right near your Golden Tulip hotel, you can stroll through the Haie Vive district and be sure to see the Place des Martyrs, a historic place in memory of the inhabitants who fought for the country’s independence. In the center, you can visit the Church of Saint Michel as well as the Notre-Dame-de-Miséricorde Cathedral, a must-see in Cotonou: constructed in the 19th century, it is the main Catholic sanctuary in the city, and it stands out thanks to the large red and white stripes on its facade. The Zinsou Foundation and the Place de l'Etoile Rouge are also worth a visit. To the southwest of the city center, you will find the beach of Fidjrossè: lively all year round, it is line by palm and coconut trees. You can relax on a sun lounger or have a drink while watching the merry-go-round of fishermen who bring their nets back to the beach. In the north of Cotonou, you can spend unforgettable moments by the immense Nokoué Lake. 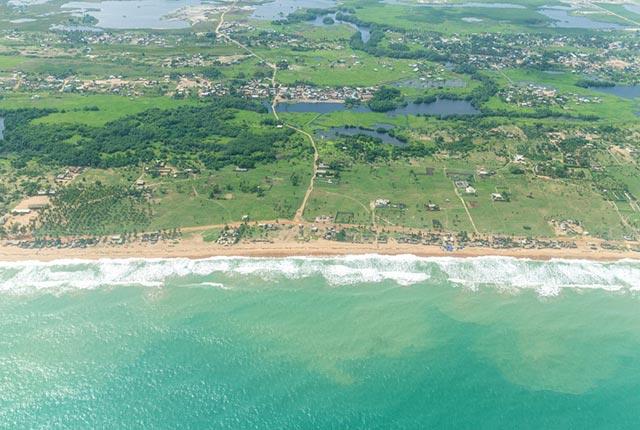 In Cotonou and throughout the south of the country, corn dough is the staple of Beninese cuisine. One of the best-known culinary specialties is akassa: it is a fermented corn dough with a sauce made of tomatoes, onions, fish and peppers. Amiwo, also called "red dough", is also a traditional dish that normally serves as a side dish: it is a dough made from corn flour, prepared with tomatoes, onions, dried shrimp and oil. It is generally eaten with chicken precooked in a broth and then fried. On the sweet side, tévi, fried yam donuts, are a must. Do you want to transform your stay into a gourmet getaway? Then return to our 4-star hotel in Cotonou and head to our Golden Tulip restaurant to taste traditional dishes and Beninese specialties and have a delicious time.

Find a hotel in Cotonou

Known throughout West Africa for its huge Dantopka market, Cotonou is a place with many surprises in store for you. From your hotel near the Haie Vive district, you can quickly reach the sites of the city center thanks to the local buses and the numerous zémidjans which crisscross the streets. On the left bank, you will visit iconic monuments to immerse yourself in the city's culture and history. You will cross the Old Bridge over the lagoon and end up on the right bank. Further south, not far from your hotel, you can walk along a large sandy beach and breathe in invigorating sea air. If you prefer the comfort and freshness of our 4-star hotel in Cotonou, you can relax in our dedicated spaces. You can then go out to our terrace to sip a cocktail in peace.
Golden TulipBeninHotels Cotonou